How to Deploy Sitecore to Azure Part 2: Creating Payloads

This four-part blog series is exploring how to deploy a local Sitecore instance to Azure. We’ve already covered setting up your environment. In this section, we’ll explore how to create your payloads.

Because we are deploying an XP3 instance, we need to create a payload for each individual role. Let’s start by creating the payload for the Content Management (CM) instance. If you want to know more details about what a payload is and how they work, you can read the official Sitecore documentation.

1. Create Folders for the CM Role 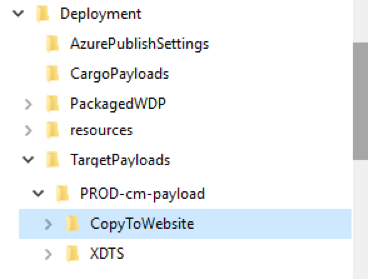 2. Create the Connection String and Other Transformations

The next step is to update our connection strings with the correct connection string values we will use in production. Remember the rules for naming and location listed in the Sitecore documentation.

Sometimes you need to add extra files to your final deployment. In my case I needed to add a configuration file called “Sitecore.Xdb.Remote.Client.config” to allow my CM instance to communicate with the REP instance.

4. Repeat Steps Two and Three for Each Role

What we have done is created the transformations that will change the configs and add any additional files we want to the deployment package of the Content Management (CM) instance only. To have a fully functional XP3 environment we need to create a payload for each role, each with their own connection strings and relevant configurations files. Check Sitecore documentation for how to properly configure each individual role.

Now that we have created the payload directory with the transformations and extra files that we want, we need to create the .sccpl file. This is done using PowerShell.

With the payload in hand, we are ready to move to part three of this walkthrough, in which we create the web deploy package files.

For questions regarding Sitecore or other development topics, reach out to us at findoutmore@credera.com.