Windows Phone 8 was officially released in the U.S. on October 29, 2012. Windows Phone 8 marks the first mobile device operating system that uses the Windows NT kernel, which is also used by Windows 8 on tablets and PCs. This is a huge advancement in forward thinking, alluding to the eventual symbiotic relationship that mobile devices have with other devices, like tablets and PCs. Windows Phone 8 shares the Metro User Interface developed for Windows 8 and uses Live Tiles that replace the traditional application icon on other mobile devices. Live Tiles can be moved and resized, and normally give the user a preview of “what’s happening” in that application. Windows Phone 8 has many attractive features and capabilities that come together to make a very compelling argument for user adoption. As a former iPhone user who has made the switch to Windows Phone 8, I want to share the top 3 areas that convinced me to make a change.

For most consumers, the first question about a new electronic device is, “What’s cool about it?” Even developers often find themselves thinking of their Microsoft products as toys. Windows Phone 8 definitely has a coolness factor to it. Here are a few of the features and functionalities that really caught my eye:

–        Internet Explorer 10 (IE10) – It was designed and intended for Windows 8, and subsequently a perfect match for Windows Phone 8. IE10 takes its predecessor to another level in regard to CSS3 support, hardware acceleration, HTML5 support, and overall performance capabilities. IE10 includes a built-in Adobe Flash Player (sorry iPhone users) that was developed as a collective effort between Microsoft and Adobe. The biggest selling points for me on IE10 are its speed, clarity, and the vast amount of screen space that the Webpage is allowed to take up.

–        Camera – Each device that runs Windows Phone 8 will vary in the capabilities of the camera in regard to pixels, resolution, flash, etc. However, there are some very exciting features within the operating system that make using the camera a whole new experience. First, the camera has the ability to take panoramic pictures. Second, the camera has a self-timer that allows the user to take self-portraits without using the front-facing camera (less powerful). Lastly, and my personal favorite, the camera has a feature called Smart Group Shot that allows the camera to take a burst of pictures at once, then using an algorithm synthesize the best pieces of all the photos into one perfect image. Before I was aware of this feature, I was amazed at how in-focus and clear my pictures were even when I was not holding the phone steady.

–        Near Field Communication (NFC) – This is a feature that allows users to pass documents, photos, videos, contacts, and other files to another phone simply by bringing the phones close together. NFC technology is also capable of processing monetary transactions using another very cool feature called the Wallet Hub. This is where all of your financial accounts can be stored and leveraged from your phone. In the future, NFC technology will also allow phones to communicate with tablets and PCs.

2.     Microsoft Office and the Cloud

Microsoft Office integration has never been easier than it is now with Windows Phone 8. Microsoft’s Cloud storage application SkyDrive makes file sharing and collaboration extremely easy between your Windows Phone and your tablet or PC. By simply linking your Windows Live account to your phone and your desktop Office, the experience is seamless and uninhibited. The Office application on Windows Phone breaks the mold when it comes to viewing and reviewing Office documents from your phone (see Figure 1). Traditional thinking would tell you that most phones are capable of opening Word documents and maybe Excel spreadsheets. In Windows Phone 8, not only does it provide the most powerful Office renderer on the market, but it also allows the user to create and edit Office documents straight from the phone. Documents that are stored on SkyDrive can be opened, viewed, edited, and saved from the phone. These documents are then immediately available from any device making collaboration from anywhere a realistic option. The Office application can also view documents that are in SharePoint document libraries. OneNote is also synchronized via your Windows Live account giving the user the full power of OneNote straight from the phone. 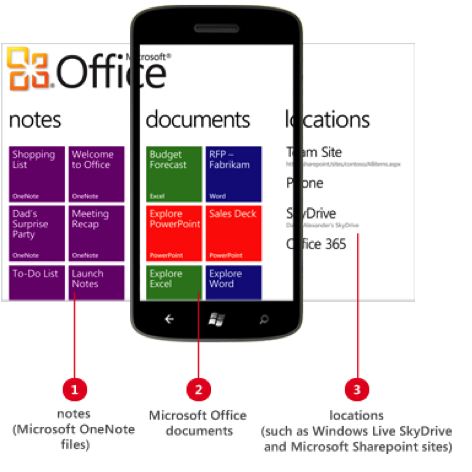 “Windows Phone 8 is the smartphone OS for which Microsoft-based businesses have been clamoring,” said Paul Thurrott, Microsoft publisher and editor for Windows IT Pro.

More than ever before, a mobile operating system completely caters to the needs of Microsoft-based enterprises.

–        Device Administration – Using Microsoft System Center 2012, internal IT administration becomes easier than ever. Devices can be completely encrypted using a built-in technology called BitLocker and can be remotely wiped through the System Center. Password and PIN policies can be administered and monitored as well.

There are many compelling features of the Windows Phone 8 platform, three of which we’ve discussed today. We would like to know why you may have switched to Windows Phone 8. Send a tweet to @CrederaMSFT with your reason for switchi