The Necessity of Project Management

The past four years of my life have been a major immersion experience in a foreign culture—the culture of academia. As a person with a business mindset, completing a bachelor’s degree in physics made me feel like a traveler in a foreign land. As I have always found to be true as a tourist, every culture has more similarities to others than I initially expect, and academia is no different. Every discipline requires planning, including academic research. Unfortunately, I found that projects were often inadequately planned in my department, resulting in problems with funding, reputations, and future research.

The lack of project planning in the physics department reflects a common trend I have noticed throughout my life. Inappropriate planning very easily leads to negative impacts on an organization’s financials, credibility, and ultimately the potential for future success; however, successful project planning can lead to growth in all three of these areas.

Growing up with a project management professor as a dad, I was constantly surrounded by propaganda about the importance of project planning. My dad began teaching at Texas A&M as a part-time hobby when I was in fourth grade, and in order to test his Microsoft Project for Dummies handbook, he asked me to build a project network for an imaginary soccer tournament with the software. Since I passed the test, he assumed his college students would be able to as well.

In 2008, my dad became the project manager for the construction of a Holiday Inn Express in Hearne, Texas (a property for which he is the managing partner). I remember walking through the hallway of the makeshift office in an old warehouse with the entire wall covered in a project network. Thanks to my dad’s “test,” I could identify the critical path and understand the concurrence of events as the project progressed.

The hotel construction project provided me with greater context of the real-life implications of project planning. If potentially concurrent tasks were not identified properly, revenue would be lost for every day the hotel did not open. If the critical path was inaccurate and some predecessors were missing, the hotel would not open on time and reservations would have to be cancelled. Further, if tasks were inappropriately assigned, the quality of work would potentially decrease and lead to long-term structural problems. Thankfully, my dad’s planning accounted for all of these issues, and the hotel opened on budget (the financials) and on time (credibility) and is still a beautiful property today (future success).

During my junior year, I volunteered to help build a rail gun for the Texas A&M Physics Festival. A rail gun uses stored electric energy to accelerate a projectile rather than gunpowder or explosives, making it a powerful but safer demo to display to the public. Our team consisted of a graduate student, three juniors, and three freshmen—all physicists and engineers.

The goal was clearly defined—build a rail gun that can accelerate a projectile to 70 mph in two feet. The rest of the project had no definition. No projectile design. No timeline. No safety precautions. We only had the rails and the base, and everything else had to be custom designed.

The creativity of our team was remarkable. For months we discussed different designs and built models to determine the best strategy for achieving our goal. The problem was that the design phase lasted several months too long, and we had to rush the construction phase in the month preceding the festival. Many of the safety precautions that we had elegantly designed had to be neglected for sake of time, and many of the components were made with poor quality. As a result, our first test fire occurred at 11:46 the night before the festival.

It worked… sort of. But not well.

More than anything, our rail gun made a large boom and a flash of light. If the projectile did leave the rails, it barely fell out. Additionally, our diagnostics were all destroyed in the test fire, so we had zero information on what was actually happening. But the Physics Festival was the next day, so we had to present what we had and try to tell the visitors why we thought it was not working.

Having used our entire budget, we did not have the resources to replace our broken parts. We also had to bear the jokes of fellow physicists throughout the next year. Thankfully our reputations outside of the project provided enough convincing to ensure funding for one more year of work. We were very aware that if we did not have a working product by the next Physics Festival, the project would probably be scrapped for good.

We all wanted to continue the project in the fall, but our class schedules were too consuming. The time off allowed me to evaluate the reasons for our failure. Primarily, the lack of project planning meant a linear approach of activities and a mismanaged timeline. The result impacted all three areas of interest mentioned previously—financials, credibility, and potential for future success. 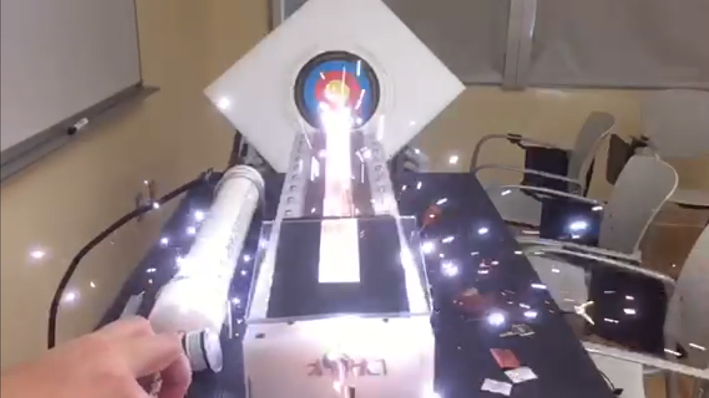 When we regrouped in the spring of 2016, our team was narrowed to five members, and I presented a prepared project network to show everyone on our team the tasks that could occur concurrently and the appropriate timeline to complete the project. The team agreed with my assessment, made jokes about my business side, and proceeded to divide tasks and set deadlines. Although some members of our team struggled to meet their deadlines, we still managed to test the rail gun with a week to spare before the festival thanks to the extra time that was allowed at the end of the critical path. The rail gun worked remarkably better than the previous year, and after a week of modifications, we managed to have a very impressive result—not 70 mph like we had optimistically hoped, but somewhere around 30-40 mph.

Although I received grief from my team of physicists for bringing so much business planning into the project, I knew that inefficiencies would again plague our project if we did not plan appropriately. The changes that I implemented allowed us to avoid facing the three consequences of poor project planning for a second time.

Unfortunately, many physicists don’t learn this lesson. Throughout my four years in this foreign land, I saw and learned about many projects that failed due to a similar lack of project management. In addition to the rail gun, I worked on a research project that involved building superconducting magnets. Shortly after my summer internship, the project lost funding because the previous magnet in the lab was five years behind schedule. (It was only supposed to take two years.) While I was disappointed to see my work thrown away, the grad student who I was working with lost much more as this magnet was supposed to be the topic of his thesis. He eventually quit grad school to work in the energy sector. I also witnessed many other graduate students facing similar struggles, often staying for more than eight years to finish their theses. One even took 11 years to graduate! With many of these students, I think project management could have dramatically shortened their stay in graduate school, allowing them to find salaried jobs sooner and not having to explain in interviews why their doctorate took so long.

Whether looking at our rail gun, the magnet lab that I worked in, or the careers of graduate students, poor project management led to losses in funding and reputations. Thankfully, we were able to implement change in the rail gun project before we lost support of the department, whereas the magnet lab is still facing consequences today.

Although I think physics is an extremely interesting field, my time in this foreign land was a painful experience as I watched so many projects suffer the consequences of inappropriate project management. After growing up in a planning-heavy atmosphere, I determined that I wanted to establish my career in an environment of strategic planning principles. Ultimately, one of the factors that convinced me to work at Credera was their reputation for providing project management expertise. Through implementing project management skills within our organization, Credera has not only avoided the pitfalls of poor planning but found great success in financials, credibility, and growth. Not only am I excited to see this trend continue in my career at Credera, but I am eager to help our clients achieve the same success.