The 5 Drivers of an Analytical Competitor

What if I told you that five companies have a combined market value equal to the GDP of France? If you guessed that I’m referring to the notorious FAANG stocks, you’d be right. The success of Facebook, Apple, Amazon, Netflix, and Google (now Alphabet) is no secret, so their market value of $2.4 trillion shouldn’t come as a surprise.

But what if I told you these companies share five core qualities? No, I’m not talking about excellent products, brilliant founders, or nap pods. I’m talking about the five drivers of an analytical competitor. In the age of big data, machine learning, and the internet of things, companies across all industries are looking to better leverage data, but the FAANG companies have had far more success than their peers.

Analytical competitors recognize the need to fully utilize their data to outperform the market. By doing so, they are able to understand the impact of outside factors on product demand, predict issues in their supply chain, and maintain an optimal level of inventory. These types of data-driven advantages are part of why the FAANG stocks outperformed the S&P 500 by $520 billion between March and May of this year. By breaking down the five drivers that foster this type of competitive advantage, this blog post will outline how any company can take steps toward competing on analytics. 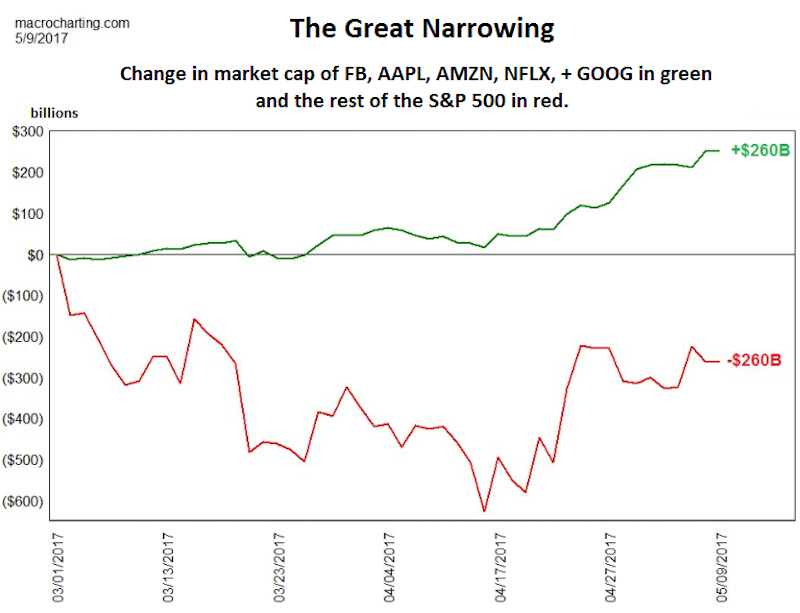 1. Vision from the Executive Suite

In Google’s 2016 Founders’ Letter, CEO Sundar Pichai wrote, “A key driver behind [our] work has been our long-term investment in machine learning and AI … It’s what has allowed us to build products that get better over time, making them increasingly useful and helpful.”

Sundar’s vision for machine learning and AI (artificial intelligence) is a great representation of the first driver of an analytical competitor: vision from the executive suite. Just like any companywide change, analytical maturity will stall without support from key leaders. But support isn’t enough. Leadership must embrace analytics and understand the impact it can have on their objectives. This doesn’t mean every CEO should be a data scientist. However, it does mean they should provide the resources and organizational mindset necessary to allow data-driven ideas to flourish.

In addition to executive level support, there must be a focus on business outcomes. This type of focus enables clear goal setting and ultimately increased performance. A good example of this is when Netflix was bidding for a political drama against HBO and AMC. Netflix performed extensive data analysis to gauge a critical business outcome: how successful the show would be.

When describing the analysis performed by Netflix, Charlie Kim, Rasmus Wegener, and Florian Hoppe of Bain & Company point out that “Netflix executives not only knew [what] qualities were likely to make the show popular; they also knew how long viewers had stuck with similar programs, through seasons and individual shows, and which characters had drawn the strongest interest. That confidence allowed Netflix to make a bolder bid and win the show.” Over 50 Emmy nominations later, it’s safe to say they made the right decision.

Recapping his first five years at Airbnb, data scientist Riley Newman said, “While answering questions and measuring things is certainly part of the job, at Airbnb we characterize data in a more human light: it’s the voice of our customers.” What a great perspective on data. It’s this type of mindset that is key to the third driver of an analytical competitor: customer centricity.

In many cases, data represents people—their preferences, routines, needs, and many other descriptors. By using this information to better serve their customers, analytical competitors, like Apple, have created a serious competitive advantage. In a Forbes CMO Network article, Daniel Newman notes that “Apple users stick with the brand despite the products costing three times more than other similar products. That’s because Apple values the customer experience and people respond accordingly.”

One of the most common problems solved by analytics is time. When partnering with a new client, it is not uncommon for consulting firms, like Credera, to find reports that take days to run. This may be due to segmented data sets, manual calculations, or extensive data clean-up. While there is tremendous value in making these processes more efficient, improved back-office operations are not enough to sustain long-term success. To become an analytical competitor, analytics must also be a revenue driver for the organization.

An excellent example of this is Amazon and the algorithms they use to drive targeted advertising. They collect tremendous amounts of data on user preference and use that data to predict future purchases. More specific recommendations and customized channels engage users and ultimately generate greater revenue. With a market value of over $500 billion, it’s hard to argue with their approach.

Say your company had an unlimited budget to implement the latest and greatest analytics technology. You could have the best data transformation tools, machine learning algorithms, database platforms, and visualization tools—all of which are finely tuned to the needs of your business. This would be a dream for many analytics professionals, but the company would fail to compete on analytics without the correct people and processes in place. It would be like purchasing a high-end road bike without having the slightest idea of how to ride one.

Without the proper team in place, the technology will be underutilized and result in little value. If you have the right people, but lack the appropriate processes, your system will grow in a segmented and inconsistent way that becomes a headache to maintain. The right people and processes must both be in place to successfully incorporate technology.

Anyone Can Use Data

The FAANG companies are using analytics to help dominate their industries and revolutionize the world we live in. But you don’t need to be Facebook or Netflix to compete on analytics. All companies, big and small, can move toward becoming an analytical competitor with an intentional commitment to data. The road to success can be long, but it begins with small steps. Quick wins in reporting, data storage, and process improvement can have a significant impact early in the journey. The key is to focus on the five drivers of an analytical competitor during the early phases because it’s these qualities that foster long-term success in analytics.