Custom application development in the SharePoint environment has always been a challenge (that’s the nicest, most professional way I can put it). At the time SharePoint was unveiled, almost any solution you could build in Visual Studio could be executed and viewed in a browser simply by pressing the F5 button.

For SharePoint, not only did you have to do your development in an environment where SharePoint was actually installed, running your application became much more complicated. Before getting started you’d have to:

Also, because custom web part code ran alongside the core platform runtime, any developer could create a web part – as humble as a simple image rotator – which could potentially crash the entire farm.

To be fair, SharePoint as a concept was leagues ahead of its time when it was released and operates with virtually no comparable competition even today. The SharePoint team delivered a very innovative CMS and collaboration portal platform which, as a first of its kind and magnitude, necessarily had many challenges to overcome. Indeed, the initial incarnation of SharePoint paved the way, with best practice approaches and pitfalls to avoid, for countless subsequent CMS and portal implementations.

Pushing your solution out of development (i.e., to test or production) basically involves deploying your web application to a production web hosting environment (which takes the place of your development hosting) and telling SharePoint where to find the production-hosted application.

When you launch a provider- or auto-hosted application from your SharePoint 2013 portal, there is a back and forth conversation that occurs between SharePoint and your application, via a series of redirects, which essentially authorizes your application and allows it to create a SharePoint context. Once I deployed my solution to the Azure hosted service, this process stopped working and instead began to throw all sorts of nasty errors.

The remainder of this post is concerned with helping you overcome these not-so-obvious issues and get a provider-hosted application successfully running as a Windows Azure PAAS solution.

The first error was pretty obvious – the SharePoint 2013 SDK is not installed by default when a Windows Azure web or worker role is created. Therefore, when your application starts spinning up SDK objects to communicate with SharePoint, it runs into problems. This can easily be overcome by bootstrapping the SDK to the web or worker role. If you’ve never bootstrapped an external dependency to an Azure role, it’s a simple process, but can be a little confusing until you do it once or twice.

The following sharepointclientsdk.cmd file can be used as a template. Please feel free to modify it to meet your specific needs.

Notice that the command file is essentially a batch file with a series of commands that will execute to install and configure the SDK. Each step of the process outputs information to a log file, sharepointsdk.install.log, in the current directory. Before the SDK will work properly, IIS must be reset – and for some reason, when IIS is reset, the World Wide Web Publishing Service doesn’t automatically restart. So this script also restarts that service here.

4. Finally, configure each web or worker role that needs to install the SDK to execute the bootstrap commands.

The command file can be bootstrapped as a startup activity in the ServiceDefinition.csdef in the Windows Azure project. 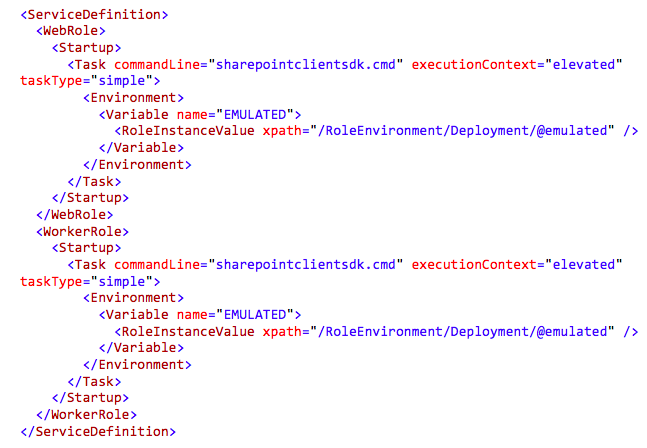 It’s frustrating to overcome one hurdle and be immediately confronted with another. Unfortunately, this is the case here. As soon as you figure out all of this bootstrapping and redeploy your application, you realize that the validation handshake now fails with a vague security/communication error.

Without getting too far into the weeds, the problem is that the SharePoint 2013 SDK requires permissions that your IIS application pool identity doesn’t have. This was a challenging fix to build because the available managed code examples of accomplishing this have changed with each release of Windows Server. At the time of this writing, Windows Azure role instances were running some flavor of Windows Server 2012 R2. I eventually had to install Visual Studio on a Windows Server 2012 R2 VM to build and debug a prototype there. Thankfully for you, if you’re reading this post and this code works with the version of Windows Server powering current role instance, you should be able to more or less copy and paste.

In your WebRole.cs file for your web role application, add the following function which can be invoked from the OnStart function. Make sure to only run this code if RoleEnvironment.IsEmulated is false.

The problem is that when you generate your client secret and client ID using SharePoint’s application registration utility page, you have to tell SharePoint where your provider-hosted application will be hosted. In the case of Windows Azure, it will be hosted at a URL that resembles https://yourapp.cloudapp.net. When SharePoint attempts to handshake with your application it will expect the remote host to verify that it is indeed running at the provided cloudapp.net URL. However, the cloudapp.net URL is actually pointed at the load balancer which resides in front of your web role instances, while the actual web role instances have been named after semi-random strings. Therefore, when you put all of this together, you get a handshake that looks like this.

SharePoint to Provider Hosted Application:  Are you https://yourapp.cloudapp.net?

Provider Hosted Application to SharePoint:  No. I am ANCG43D (or something like that).

The actual exception is     “ANCG43D” is not the intended audience “yourapp.cloudapp.net”

Thankfully, the author of the TokenHelper.cs class, added a loop hole for situations just like this one. When the token helper is performing its validation, it compiles a list of valid host names using information from the host environment. By setting the HostedAppNameOverride application setting in the project’s web.config, the developer can specify a host name to be added to the list of valid names. So in the case of a Windows Azure PAAS web role, you would add the following setting to your web.config.

The new SharePoint 2013 application model solves a lot of really big problems that have historically plagued the SharePoint platform. Likewise, as it necessarily happens with innovation, a few new problems have been introduced. With a little research and community support, these challenges are being overcome on a daily basis, resulting in a much more robust, secure, stable, and flexible development experience and hosting paradigm than was offered by SharePoint 2010.

I hope this post offers some guidance on these new issues to help you quickly get up and running with your Windows Azure provider-hosted SharePoint 2013 application. If you have ideas on other SharePoint 2013 topics that would be useful to you – leave a comment. Looking for additional information on SharePoint 2013?  Check out Credera’s other SharePoint-related blog posts or follow @CrederaMSFT on Twitter.