Microsoft announced preview editions of two of its most important developer-related tools about two months ago at a Build conference: Visual Studio 2013 and Microsoft .NET Framework 4.5.1.

The preview of Visual Studio 2013 isn’t a surprise, as Microsoft announced it was coming at the TechEd this year along with the Team Foundation Server 2013 Preview. The update of the .NET Framework, however, was definitely a surprise to everyone. It is totally unusual for Microsoft to come up with major updates to a key product two years in a row, but it does fall in line with CEO Steve Ballmer’s emphasis on “rapid release” during his keynote.

On the broader view, many enhancements have been made to the new Visual Studio 2013 Preview edition like agile portfolio management, innovative features for greater developer productivity, support for Windows 8.1 app development, web development advances, debugging and optimization improvements, and of course the extended ALM capabilities. Today we’ll look at some of the most important updates from a developer’s perspective.

Important (and cool) changes have been made to Visual Studio IDE: improved colored icons, more contrast in the user interface, the ability to search the Options window directly, and many other enhancements.

You can find a guide to new and commonly-used IDE keyboard shortcuts in Visual Studio 2013 IDE Tips and Tricks.

The new IDE uses your Microsoft account to connect to your Visual Studio profile, including your Team Foundation Service account. The first time you start Visual Studio you will be asked to log in. Based on the authentication, Visual Studio finds and applies your license and synchronizes your settings (such as fonts, language preference, and keyboard settings) from the cloud across all of your computers. You can customize what settings to replicate on all of your computers. How cool is that? 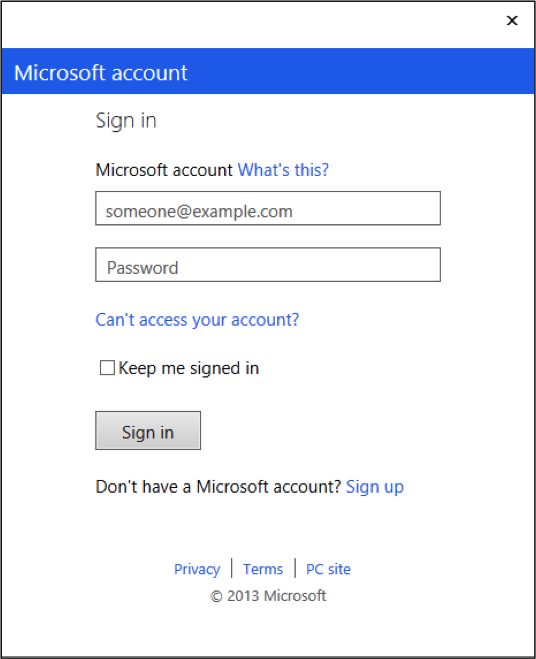 The first time you start Visual Studio, you can select one of the three Visual Studio themes: Light, Dark and Blue (you can change those settings anytime). Once you are logged in, it displays your name on the top right corner and when clicked will actually show you information including your email, URL of your instance of Team Foundation Service, Team Project you are currently connected to, and Account Settings which is the Visual Studio Profile.

There is also a new Notification Center panel on the top-right corner of the IDE next to Quick Launch window. This will keep you informed about any new updates or notifications and when they are received. For example, alerts like license expiration, updates to Visual Studio, and updates to any components of the IDE are all notified.

Now since this is a preview edition, Microsoft is keen on getting your feedback and so added a feature to let them know your joys and grief with the tools.

Some of the popular code editor features in Productivity Power Tools can now be found in Visual Studio IDE. Some of them are:

Peek Definition: You can literally peek through your Visual Basic, C#, and C++ code definitions without opening a new document tab. If you want, you can promote it to the document level to be its own tab.

Astounding Scrollbar: The scrollbar experience has totally changed in the new Visual Studio 2013 Preview. Now we have bar mode and map mode on the scroll bar and we can also configure it to show things like errors, warning, changes, and breakpoints. It is quite helpful to have those features displayed on the scroll bar which was previously available with the use of Power Tools. Another much-anticipated feature is the ability to peek into the code before scrolling like we have on Sublime Text or some of the modern text editing software. Now it is all included as part of the IDE and it’s great.

The scroll bar also shows you where your mouse pointer is on the screen by showing a blue line on the scroll bar. This is a cool little feature since developers tend to lose the mouse after a lot of scrolling.

Navigate To (Ctrl + ,): This feature enables you to search for pretty much anything in your solution. It will give a live result previewing when you type and a wonderful streamlined inline UI experience. Once you keep scrolling using your keypad, Visual Studio will open the files for you as temporary windows. To those who are familiar with ReSharper, it is similar to or even better than the Navigate To feature (Ctrl + T).

Now that’s making it even more exciting, isn’t it?

In Visual Studio Ultimate Edition, you can use the CodeLens feature, which shows who changed what and what changes have they done, test status and coverage, and code references.

The first part shows how many times this code is referenced in the rest of your application, the second part is the test’s status if they are any associated with this method, the third being who last modified it and how many changes were made.

You can hover on these to dig in and see more detail and it will show a little popup that gives you more information. If you want to actually go the file, all you have to do is to double click it and there you go. It’s that simple.

This CodeLens feature also gives you great information as to how many tests are written against this code. This makes it a lot simple for the developers to make sure that they have good code coverage in the code they write or have written. 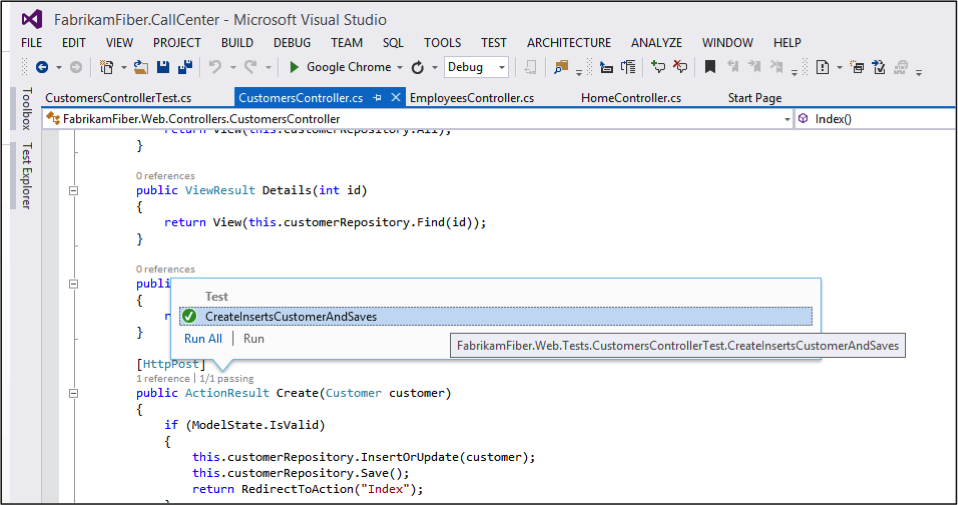 Some of the changes that have been made around Team Foundation are:

– You can now create Team Projects that use GIT for the version control system.

– You can also easily switch context to other team projects you are connected to.

Team rooms is a new concept that can increase productivity. It is a chat room for the entire team on the team project. You can ask questions, discuss work in progress, share your status, and clarify issues or questions as and when they come up. You can also configure it to show any check-ins being made and any builds that are run. Having all this info for the entire team on one platform can boost your team’s productivity.

Team room provides an area for nurturing and capturing communication among team members, both near and far. The advantage of using team rooms instead of email chains is you automatically receive an audit trail of conversations and decisions. It is all persisted information and cannot be deleted by a team member and so the conversation should be thoughtful and needy. 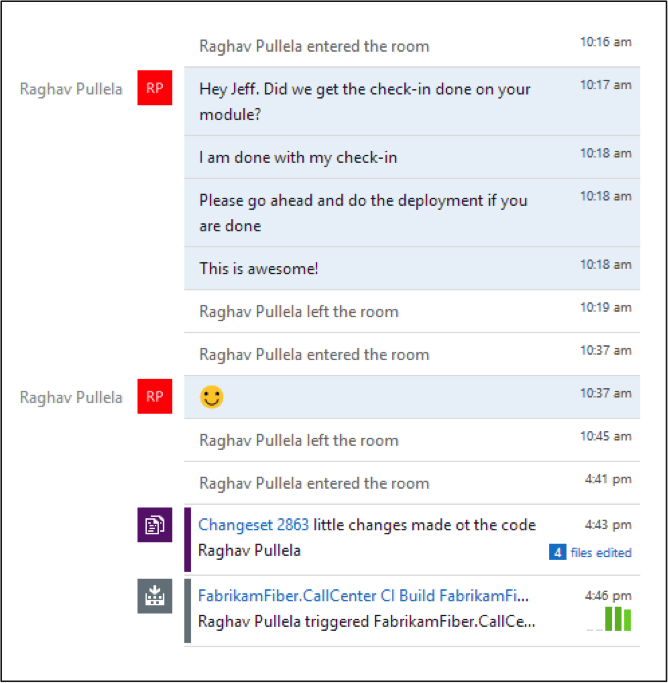 Looks like I was the only active person in my team project and so everything was from me.

A team room is created by default for every team when it’s created. Any additional rooms required for ad-hoc discussions can be created when needed. This feature is available in both TFS on-premises and our cloud-based service.

You and your teammates can use the web-based Version Control Explorer to create or reply to comments about source code changes and reviews. You can add comments to changesets and shelvesets or GIT commits. You can also find comments by using the Version Explorer filter. You can select lines of code and then click the comment button that pops out to add comments and if you want to reply to a comment, just click the reply button and add your comment. These conversations are lightweight when compared to the team room conversations and can be deleted.

In Team Foundation Server 2013 Preview, you and your team can benefit from some of these new features:

– Defining a build and customizing is simpler.

– You can now drop your build outputs into TFS from both Team Foundation Service and on-premises servers.

– You can also view diagnostics for every build, regardless of whether or not you drop your build outputs.

– You can undock the Builds page from Team Explorer and open it in a new window. 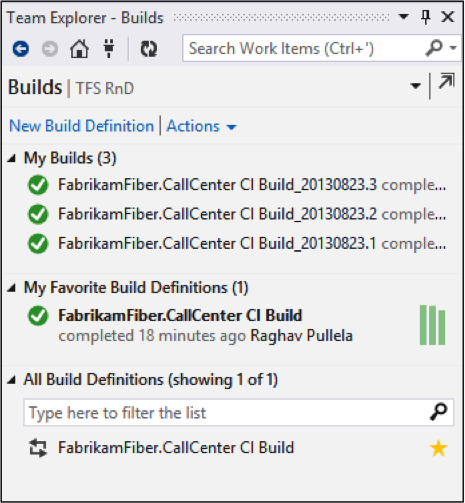 In the new Visual Studio 2013 Preview, creating websites or services using the Microsoft platform provides you with many options including ASP.NET MVC, WCF or Web API services, etc. Previously, working with any of these approaches in Visual Studio meant working with separate project types altogether and the tools were associated with the specific project type.

Now, with the new Visual Studio 2013 Preview, you have the One ASP.NET vision that unifies your web project experience so that you can create ASP.NET web applications using your preference of component frameworks in that single project.

This new feature gives you the ability to create hybrid applications that include improved versions of WebForms, MVC, or Web API, all in the same project. This means you can mix and match all the right tools for the job within your web projects, giving you increased flexibility and productivity

Another great feature included in the new Visual Studio 2013 Preview is the Browser Link feature. Imagine you are designing web pages or are implementing the design of others. You tweak HTML and CSS, refresh the browser, and repeat endlessly. It is frustrating and tedious. Visual Studio 2013 Preview eliminates this back and forth using Browser Link, which establishes a connection between Visual Studio and one or more open modern browsers in an interactive development experience to keep them in sync with your markup changes without the need of any manual effort to refresh those browsers. Isn’t that just amazing? For me this will undoubtedly turn into one of the most used and appreciated features of this release.

Download and start using Visual Studio 2013 Preview today to try the tools and services you need to create amazing applications. Before using this release you will need to comply with Microsoft Software License Terms, which talk about your rights and any limitations associated with the preview on applications you develop either for your internal production environment or that you may distribute to others. Follow us at @CrederaMSFT for more great tips and tricks to Microsoft development, or if you have questions please use the comment box below.