Google’s I/O conference introduced various exciting developments to existing and new technologies. Among these changes, Firebase has received a lot of attention. The updates to this technology will improve how teams will be able to manage their mobile applications moving forward.

As a platform, Firebase’s goal is to provide a one-stop-shop for everything a developer needs to take an application from idea to production and beyond. In the past year, Google has focused on improving Firebase in three key ways: accelerating app development, improving app monitoring, and improving deployment configurations.

To further ensure that local testing mirrors exactly what you can expect in production, Firebase offers a suite of emulators to mimic actual back-end services you may use when your app is deployed to the cloud. This allows developers to find and squash production-specific bugs related to cloud services they may be using before the app ever enters production. 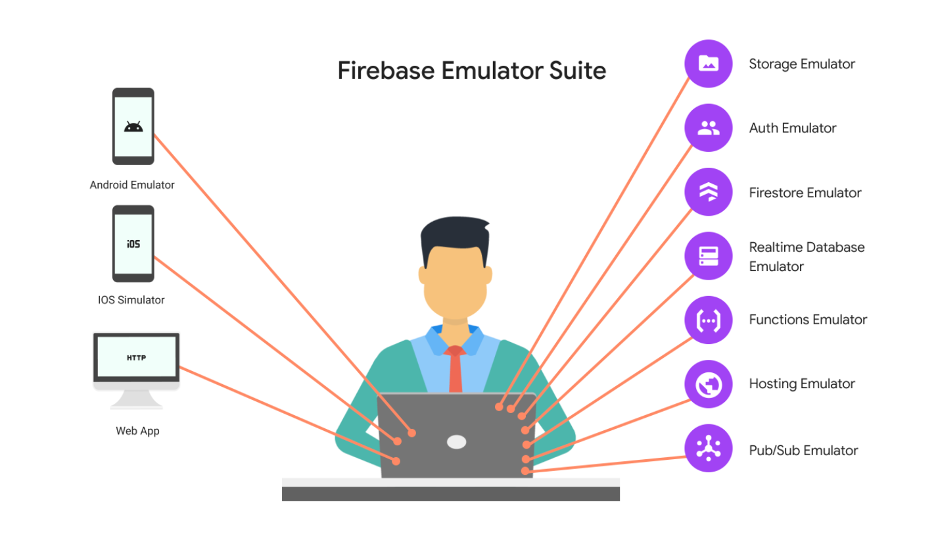 In the past year, Google has added Cloud Storage for Firebase as an emulator to the existing emulator suite. With the Storage Emulator, users can upload, download, and modify files just as they would in production. It also interacts seamlessly with the other emulators, so users can trigger Cloud Functions for Firebase and protect access to files with Firebase Authentication, all while developing and testing on a local machine.

On the distribution side of the development process, Firebase now supports Android App Bundles as a pre-release distribution method to end users for testing and initial feedback. Since App Bundles are intended to be the primary method of putting an app on the Google Play Store in the future, this added ability to test the full binaries of your application before sending it to production is a critical addition to the development process, and one that will soon become the standard for publishing apps to Google Play.

To further improve security for applications, Google launched App Check in beta. App Check is an additional layer of security that protects access to services by verifying that incoming traffic is coming from the intended app and blocking traffic that doesn't have valid credentials. Right now, App Check is available for Cloud Storage, Realtime Database, and Cloud Functions for Firebase.

Google will be expanding it to other products in the Firebase suite over the coming months. You can think of this service as an optional, simplified firewall with a quick and clean setup and integration process for existing apps using the Firebase platform.

As the final major upgrade for Firebase’s app development platform, a variety of new partner-centric extensions have been launched. These extensions allow developers to quickly integrate complex services into their applications without the hassle that traditionally goes into these integrations. The standout new extensions that were highlighted in this year’s Google I/O are:

Releasing an app into production is in no way the end of the app development lifecycle. Following the initial production release comes the monitoring and iterating stage, where user experience is carefully examined to determine ways to improve the app in the future.

In the past year, Firebase has made improvements on its app monitoring tools to deepen the developer’s understanding of the app’s performance. It is important to remember that these tools come equipped directly in Firebase, so incorporating them into your app is seamless once your app is on the platform.

Google I/O revealed that the Firebase team has improved crash analytics, now offering an SDK to bolster crash reporting and real-time data performance monitoring. Developers now have a more advanced look at how their apps are performing with live user traffic and data and a new and improved performance monitoring dashboard table. This table provides a one-stop-shop for all performance metrics observable by developers in one convenient place.

Firebase dashboards associated with remote deployments have been overhauled to provide developers with a more comprehensive and detailed view of what is happening when running remote deployments, A/B tests, and performing optimizations. One of the most important developments is that all of this can be performed without having to launch a new app version to end users.

In other words, changing configurations is dynamic and can be done without any interruptions to the app’s running process. Finally, Google announced they will soon be ready to launch a new feature of remote configurations called “Personalization,” giving developers the ability to automatically optimize and customize individual user experiences to maximize various metrics—such as revenue or engagement—through the power of machine learning.

Once set up, Personalization will custom tailor configurations based on the behaviors it detects on a user-to-user basis and will work to identify the best app configuration to serve the user to generate the most optimal outcome as dictated by the developer. The technology is currently in alpha, but those interested can enroll in the alpha program today to get an early peek of what Personalization will be bringing to the table.

Putting it Into Action

There was a lot of mobile-related content from Google I/O. If you’d like to dive even deeper into the talks and presentations, you can find them all on the Google Events website under “I/O” in the “Program” > “All content” tab. If you're interested in putting any of these updates into practice at your organization and want to talk it through with our mobile experts, reach out to us at findoutmore@credera.com.

Additionally, learn more about Google I/O's announcements to improve the technologies associated with mobile development, notable to Google's Android and Flutter, in part 1 of this blog series.

A good mobile strategy isn’t just for large businesses or retail anymore. Over 75% of Americans own a smart phone, with an incredible 96% ownership in...

The End of Third-Party Cookies Part 1: A Road Map for a Cookie-less Digital World

The end of third-party cookies presents an opportunity to make a well-orchestrated move away from an old standard and push your online marketing into ...