How to Automate Zookeeper in AWS

Provisioning complex cloud architectures can be as simple as executing a single command. However, it can be challenging to fully automate the infrastructure without performing some manual configuration after the resources are provisioned. Some services like Zookeeper require information about other machines in the architecture in order to cluster properly. Is it possible to fully automate the creation and configuration of a Zookeeper cluster to be completely up and running when the provisioning process is complete? In this article, we will show you how to do this with AWS and Ansible.

In this blog, we’ll discuss three options for creating and configuring Zookeeper instances:

One approach is to create an auto scaling group in AWS, store the launch configurations for each Zookeeper instance in S3, and write a script to inject it later. 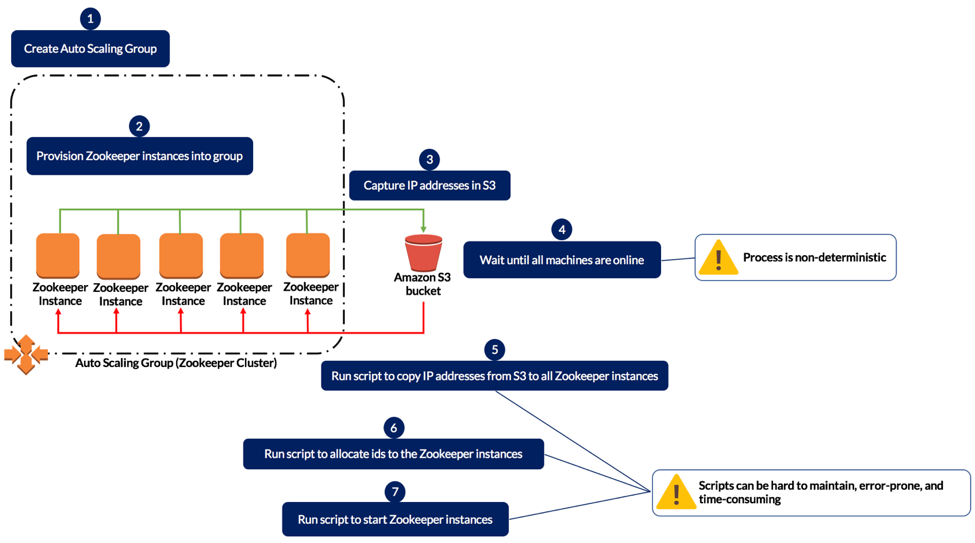 This option requires custom scripting, which can be hard to maintain, error-prone, time-consuming, and can lead to non-deterministic results. For example, as the Zookeeper instances go live in the auto scaling group, they perform a discovery to determine their IDs. The server IDs should be unique for Zookeeper to cluster properly. There is a high possibility that two Zookeeper instances will have the same server ID if they go live at the same time (which we saw happen in a few tests we ran). Furthermore, since we do not know the IP addresses of the instances before they get allocated, we need to clean the configuration file if an instance goes down and another goes up in its place. Otherwise the Zookeeper cluster will fail. Automating the cleanup process requires more scripting!

Another approach is to use an auto-discovery tool like Exhibitor to automatically discover and configure Zookeeper for you.

Such an approach is interesting, but adds new dependencies and infrastructure that need to be managed. This is not a bad answer, but not the focus of this article.

A third approach, which we used on a current project, is to configure the Zookeeper instances in AWS to be aware of each other automatically. 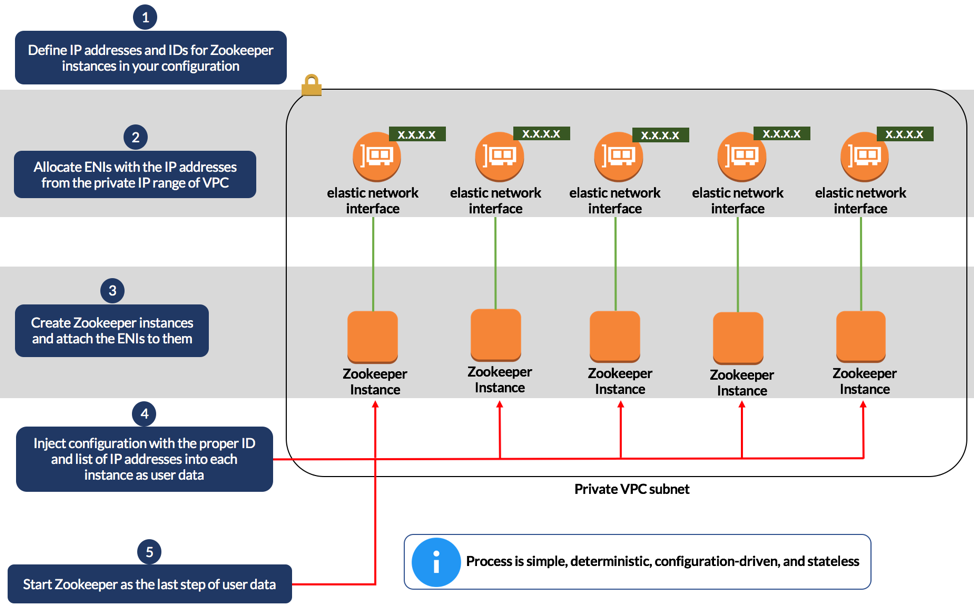 Instead of creating an auto scaling group and determining the IP addresses of the Zookeeper instances as they spin up, we used AWS Elastic Network Interface (ENI) to reserve IP addresses for the Zookeeper instances and attach each ENI to an instance. We stated the IP addresses in the configuration since they are within the private IP range of our virtual private cloud (VPC). If we were using an auto scaling group, this wouldn’t be feasible since we wouldn’t be in control of the IP addresses. Furthermore, each instance had its unique ID pre-assigned. Using this approach, we were able to fully automate the creation and configuration of our Zookeeper cluster.

The following steps demonstrate how this option can be implemented in Ansible.