A Hacker’s Five-Step Approach to Innovation 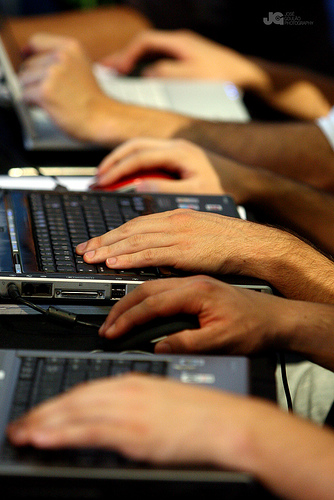 Last week I attended “Hackomotive 2013,” a hackathon hosted by Edmunds.com in Santa Monica, CA.  Initially, when I heard about it and was asked to attend the hackathon, I thought, “You realize I am a management consultant not a developer right?”  However, as I did some research, I realized that the event was about far more than writing code. First off, Edmunds itself had a big vision for the event, as described in its purpose statement: “Hackomotive is a two-day challenge that focuses on re-imagining the car shopping experience by bringing together consumers, dealers, manufacturers, designers and technologists to shatter the status quo … By bringing together the right mix of thought leaders and change agents, we believe we can r**einvent the car buying experience from the ground up.”  In my mind, reinvention of an entire industry is no small thing! I was excited to learn more.

Next, I noticed that Edmunds did not call solely developers and technologists—their target audience is actually “change agents” and “thought leaders.” Yet the event was still called a “hackathon.” Edmunds must consider all categories of expected attendees to be hackers. Maybe I could be a hacker after all. So, I researched “What is a Hacker” and found that a hacker is not confined to those who simply write code. Hacking is actually an attitude that identifies the world as being full of compelling problems just waiting to be solved in a context in which freedom is a must and boredom is an outlaw. The more I researched, the more I realized that Edmunds was right. Despite my inability to code, I, too, could be a hacker—provided I brought the right mindset to the right opportunity. What’s more, I realized that I had a lot to learn from exposure to a hacker’s view of the world. And I was right. As the event progressed, I learned a lot about the hacker’s approach to innovation, which I boiled down into five key points:

Edmunds started the event with a goal to transform the entire car buying experience—a pretty lofty goal that created noticeable excitement in the room. Moreover, it brought a lot of really talented people together. The Emcee of the Hackomotive event, Matthew E. May, stated, “Creativity is a contact sport, and having dozens of talented individuals rub shoulders and put their heads together is bound to produce something profound.” Over 100 people from all over the US came together to take the opportunity to experience and solve a major real world problem in the automotive industry. To me, this is at the core of hacking–great teams working on a big vision! And I guess Edmunds thought, to think big, two heads are better than one … but to think huge, 100 heads should do the trick! When Edmunds CEO, Avi Steinlauf, kicked off the event, the excitement in the room was palpable.  And so it began … “Hackers, start your engines!”

2.  IDENTIFY THE MAJOR PROBLEMS IN YOUR SPACE

The great Hackathon hosts, Edmunds.com, sought to reinvent the car buying experience by first identifying what was wrong with it. They polled all attendees for problem statements through a massive brainstorming session on four major categories (Research, Retail, Buying, & Ownership). In a scene that reminded me of the New York Stock Exchange, individual hackers were calling out their category specific concerns, “I can’t trust the dealers …”, “I need a trusted advisor … “ etc. Each word and thought was recorded by the Edmunds Directors. Thereafter, the Edmunds staff sifted through each category and identified a series of problem statements to which we, hackers, were to pick one and derive an innovative solution and response. It was one of the most effective ways of transforming a revolutionary – but still high-level – vision into concrete, manageable chunks that I have ever seen. So, I learned that if you want to innovate like a hacker would, you need to move from dreaming big to defining the major problems that your dream needs to solve. The faster you can move from vision to problem statements, the faster you can innovate.

3.  PORTION THE PROBLEMS AND IDENTIFY AN INITIAL FOCUS

Once the competition started, I had the opportunity to team up with four talented developers and thought leaders from Credera. Working under a deadline of just 24 hours to come up with real-life technology that solved a real-life need, we immediately realized that we couldn’t solve all of the problem statements at once. After talking through our options, our team decided that the most important one to solve, leveraging our interests and talents, was reducing or eliminating the uncertainty consumers feel in understanding the needs of their car when it is time to have it serviced. While we had interest in tackling nearly every problem statement, we realized there was only so much we could do in a day to make real progress. So, to further motivate our efforts in staying dedicated to this one issue, we pictured the twenty teams as building twenty steps (i.e., the stated problems) to reach the summit (i.e., a reinvented automotive experience). Once we narrowed in on one specific problem that we would try to solve, things really started moving! I took away another lesson on hacking-style innovation: once your major problems are identified, take them on in manageable chunks.

4.  IDENTIFY AN APPROACH TO SOLVE THE PROBLEM

Simply isolating our very own problem to solve wasn’t going to get the technology built that would create the end solution. To actually build something that worked, we needed to align on a unified approach for solving our problem. So, we started brainstorming again. After deciding what problem we would solve, brainstorming ideas were flying.  In our session, we put the problem on the board in a single statement. Below it, we listed the team’s challenges and opportunities to “fix” our problem. Then, we came up with objective and goal statements—what ultimately would we hope to achieve, and what were the opportunities and challenges that stood in the way? Next, we detailed our quick, high-level action items required to overcome the challenges and get us to the next phase of our project. Once those were complete, we were off! Within an hour, our approach was established and our team was running as a single engine, on all cylinders, headed for the finish line.

5.  LAST, BUT NOT LEAST, BUILD THE TECHNOLOGY

With our goals in mind and our action items identified, in under 24 hours we designed a solution to hack the existing API’s for necessary data, and use that data to produce information to consumers via an Edmunds sponsored interface (which we created). We decided that to solve the problem, we needed to provide a wide variety of vehicle specific service recommendations and detail to consumers, which educated and empowered them throughout their service experience.  Doing this would also help set reasonable expectations in the consumers’ minds and hopefully close the anxiety gaps between consumers and the service provider. We called our design the Edmunds EEE Service Experience.

Ultimately, the technology solution we designed provided a way for consumers to easily identify their vehicle and invite Edmunds to be their trusted Service Advisor. Automatic service notifications  based on the consumer’s specific vehicle leveraging vehicle mileage input, would arrive in their inbox or on their phone gained from a hack into the Edmunds Service API.  The content of the notification consisted of four elements: Service Recommendation, Estimated Price, Appointment Opportunity, and a promotional offer/coupon associated to the service recommendation. All elements delivered on the triple “E”: educating the consumer, empowering them, and finally, assisting in setting proper expectations with them. Each element of our solution leveraged technology and brought to life the traditional hacking required to make it work.

Though we didn’t win the overall competition, we gained some great insights into how quickly innovation can be performed! By following the “hacker’s” approach, we went from visionary goal to working technology solution in under 24 hours! And, contrary to my original assumptions, technology is not necessarily at the core of hacking. Start with the idea, vet it with a great approach and then enable it with the technology. And, as it turns out, any creative individual with passion and drive to successfully solve problems can be a hacker!