Artificial intelligence is shifting how we design for experiences. Rather than a display-and-click interface, we can simply tell the computer what to do. Conversational design is the incorporation of human-like interactions in virtual assistants such as voice-driven interfaces and messaging platforms. It’s how smart speakers strive to handle infinite cases of human commands and what makes SlackBots personable. While many smart helpers apply similar user experience principles, here are four crucial components to mastering the art of communication for chatbots.

Like style guides for front-end developers, content guidelines are the bot’s building blocks for a cohesive experience. There is not a single method for defining your digital voice, but laying the groundwork for typesetting will help you portray the personality you want to achieve. These guidelines should answer questions like: Should my bot respond in short messages? How do I keep things concise but not truncated, cheerful and not angry?  Examples across various industries of content guidelines include: Mailchimp, Buffer, Yelp, 18f, and GOV.UK

This was a critical exercise for my team when we designed a chatbot for our client. Prior to our minimum viable product release, my team and I visited recruitment offices to test our bot on warehouse workers seeking job assignments. We quickly realized that grammar, punctuation, word choice, and response time heavily contribute to the overall experience for our target users. Our findings compelled us to explore how we could leverage the bot as an extension of the client’s vision and brand.

As a result, we incorporated the following into our content guidelines:

Chances are, your bot is designed for a sole purpose. It’s important to create a first impression that feels natural while letting your users know the sky is not the limit. Determine what series of initial interactions should take place to set expectations and make the conversation run smoothly. This may be as generic as a friendly greeting with a leading question or as in-depth as displaying a menu that gives context of your bot’s capabilities and preset archetypes to serve as a user response guide.

That being said, it’s worth noting no matter how human-friendly a bot may be, users deserve to know they are not talking to a human. Visually, this can be achieved by associating messages with a bot name and icon. When my team conducted usability sessions for our chatbot prior to our initial release, our users struggled to understand that the chatbot was, in fact, not human. Additionally, they were unsure of what to ask for initially, and when they did, their requests were expressed through shortcuts, slang, and subtle hints.

For our case, we learned that introducing the bot, communicating its limitations, and explaining how to proceed was necessary. We also expressed example intents in our introduction to give users some sense of direction. Training the various phrases our users were accustomed to typing also helped utilize the bot’s fullest capabilities. 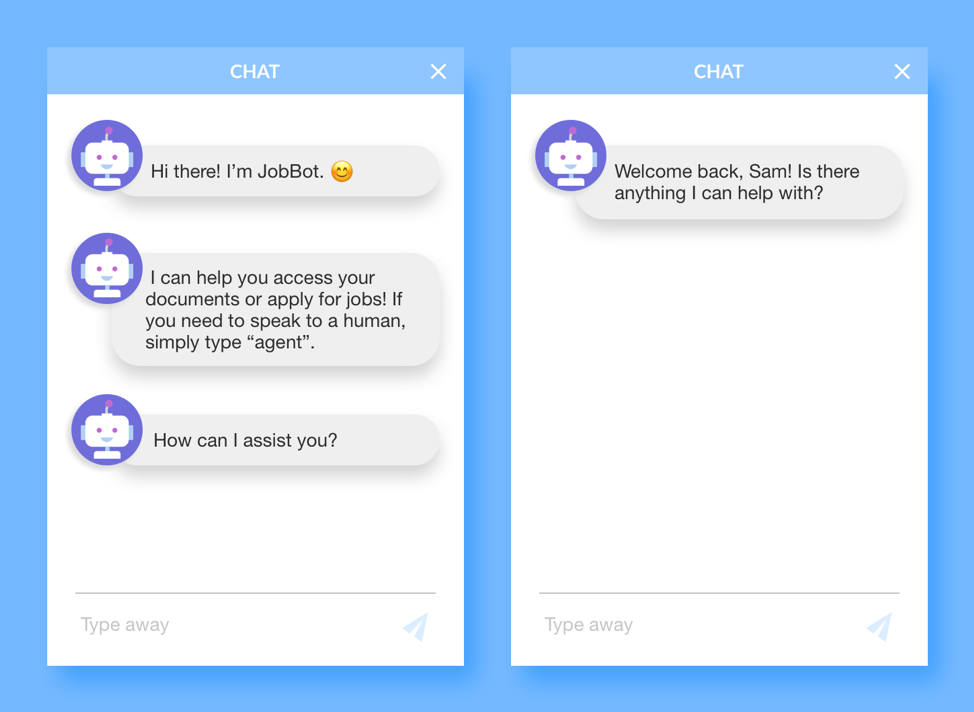 3. Prepare for the Worst

Much like humans, bots are far from perfect. It’s best to identify a small number of tasks your bot can do and ensure it performs those really well. Of course, there will be times when the bot will fail to understand. Phrasing “I don’t know,” answers in a frank but elegant way can appease user frustration by clarifying whom the user is interacting with and suggesting alternative solutions. It’s also good to have a variety of different error responses to cycle through to avoid the bot sounding like a broken record.

Despite large lists of utterances and intents, you still want to provide users a way out. If the bot fails to provide the right assistance, connect them to a human. The rule of thumb we set when developing the our client’s chatbot was “two strikes and you’re out.” If the bot failed to understand twice in a row, we figured that was enough frustration for the end user and apologetically directed them to a human agent. In some cases, a human agent was not available, so we provided the users with a choice to continue waiting or submit a message to the support team.

Visual cues such as transitions and animations reinforce the fact that your system is actually listening. Imagine Amazon’s Echo Dot with no light signals after you say a command; you’d never know if it heard you or if it was turned off. A great way to carry this concept over to chatbots is to show typing indicators. Even though bots don’t need to “type,” it gives a grace period for any server calls to be made in the background and show attentiveness in a natural way. The goal here is not to trick users into thinking the bot is human, but to denote progress and personality.

Like with most design standards, subtlety is key. When Microsoft released its virtual assistant, Clippy, in the 1990s, the moving paper clip came off more cumbersome than helpful. It offered excessive amounts of help to the point where users felt powerless. But these takeaways were crucial, as it became the forerunner for modern-day smart systems like Siri, Alexa, and Cortana.

As design continues to account for natural language processing, we look to solutions that mimic the norms of real-life conversations. Creating an interactive platform with an effortless experience enables you to connect with your users emotionally. Although virtual assistants have yet to perfect the role of an everyday conversation partner, their personalities and capabilities are advancing nonetheless.

Get Help With Your Chat Bot

How do you know if a well-conversed bot is right for your business? Assessing your users and their pain points is a great start. We’d love to help! Get in touch with us here at Credera to learn more.